Many times while working on iPad, we may require access some PC/Windows Applications. Well,,,there are some Apps out there which let you remote your Windows desktop but those are not so smooth to give you a rich user experience. This is more due to time lag between what action you perform and when it finally occurs on it.

This week OnLive launched a new iPad App, named OnLive Desktop, which lets you access a Windows 7 Desktop, not your own desktop but a virtual Windows 7 desktop from their own servers farm. Standard pack is pre-loaded with Microsoft Office 2010 Applications such as Word, Excel and Powerpoint. It also features some standard applications like Windows Media Player, Notepad, Wordpad, Paint. I have experienced Microsoft Surface Collage first time on it and it was awesome. Though standard version of it lacks Internet Explorer.

There are various service plans which OnLive has planned to offer

OnLive Desktop for iPad can be downloaded from here. You can look for further additional information at “http://desktop.onlive.com”.

I was looking at the Gtalk extension for Chrome on Mac OS X Lion (10.7) on Chrome Web Store. I liked that and installed it and now I notice that Gtalk now comes on my Mac’s menu bar as an icon.

This one is great as clicking on the icon opens up a new small Chrome window for Gtalk. So iChat beware…here comes Google without any native applications but using only Chrome browser. 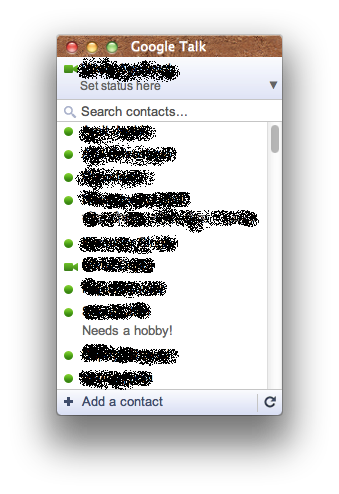 When you open or preview mails in Mail.app in Apple Mac OS X, the first thing you have problem with is big images are getting displayed within the message. Many times this makes you frustrating because you want to read the message and not want to keep on scrolling the window left and down. This is default behavior of Mail.app and does not show the images as attachments (even though sender had sent as attachment).

To overcome this behavior, you can disable the Inline Attachment Viewing flag for Mail.app. To do so, open up a terminal window from “Applications->Utilities” and type or paste below command:

At any point if you change your mind and come back to the default behavior use the below command:

Restart the Mail.app and voila!

Also remember, this will disrupt any HTML mails coming which have images.